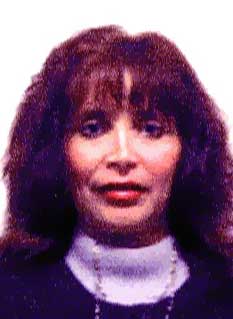 It was a proud moment in January of 2001 when Jodie graduated from computer school as class valedictorian and was selected to give the speech. A year earlier she had been so crippled by indescribable headache pain that she had to be hospitalized for five days to try to find a treatment regimen that would allow her to live her life. It has been a long road to where she is now and she tells us her story so that someone else "will see the light at the end of the tunnel." Jodie grew up in a close knit Italian family in South Philadelphia, the youngest of three sisters. The family moved to NJ when she was 19 years old, and for the most part Jodie lived at home. She worked for various firms as Administrative Assistant, and at the age of 34 she met her husband Jim, at the gym where she worked out. Theirs was a whirlwind romance, both seeming to know right away that they were meant for each other. They were married after four months and their daughter Alexandra was born sixteen months later, in August of 1994. For the first few years, Jodie enjoyed being a full time Mom before returning to the workforce on a part time basis.

About one year after Alexandra's birth, Jodie began to have extreme, but sporadic, dizzy spells when she closed her eyes, particularly at bedtime. These symptoms passed quickly so she did nothing to address them. On the 4' of July in 1997, Jodie experienced flu like symptoms along with painful feet and swollen ankles. At this point she was given a likely diagnosis of sarcoidosis, an inflammatory disease in which the body reacts to environmental chemicals as if they were a disease. Subsequent chest x rays showed that the enlarged lymph nodes had cleared and her symptoms faded. The fuzzy feelings in her head remained, however, and doctors became concerned that she may have neurosarcoidosis. She was also experiencing extreme fatigue, forgetfulness and buzzing in her head. In March of 1999, an MRI with contrast was done and she was given the diagnosis of a 2.5 X 3.0 cm acoustic neuroma. The ENT wanted to schedule her for solo surgery immediately, but Jodie was not comfortable with that option, and did not feel that he was being candid with her about the number of AN surgeries he had done. When he would not put her in touch with any of his former patients, she determined to go elsewhere.

Jodie went online and began her research. One of the places she found was the ANA/NJ website. She picked up the phone and Wilma Ruskin, chapter President, answered the call. This began a very special and supportive phone and online friendship that helped Jodie through many hard times. Jodie also researched a number of surgical teams, but after meeting the neurologist at Jefferson University Hospital in Philadelphia she knew immediately that he was the one she wanted for her surgery. She prepared her living will and wrote a letter for her daughter and one for her husband and on June 24, 1999, went in for her surgery. The neurosurgeon and ENT team used the suboccipital approach and completely removed her very sticky tumor. When she awoke from surgery, she initially felt great. She had complete facial palsy and could not close her left eye, but she was quickly on her feet with a walker and was released from the hospital after six days.

Jodie's husband took off from work the first week to care for her and was a fantastic support to her. Her mother came daily to help her for the first month. She had her stitches out on July 7 and felt her only problem was the persistent nausea, like morning sickness. When she saw her neurologist three weeks post surgery for a final visit before he retired, she complained of left temporal pain, but since all indications seemed to be good, he felt this would pass. It did not. She went about having physical and speech therapy at home but felt like she was in a haze all the time. The pain in her head became excruciating, like a hot poker in her brain radiating down her face. Three times her husband took her to the emergency room after finding her crumpled in pain in a corner of their home. Her doctor finally sent her to the Jefferson Headache Center where she had additional MRIs, with and without contrast, and CT scans. In December, 1991, she was hospitalized for five days while they tried various non narcotic medication regimens until they found what would provide relief from her trigeminal neuralgia or cranialgia and which she could safely take for the long haul. This was a new beginning for Jodie and she has not missed a beat since that time. With relief from her pain, she has gone back to work as a full time Manufacturing Planner, a job facilitated by her computer training, and she is in the throes of redecorating their condo. She expresses great love for, and pride in, their beautiful seven year old daughter, and laments the fears and difficulties her illness has caused Alexandra. What gave her great peace of mind throughout her ordeal was the knowledge that Jim was the best possible father, and this illness made father and daughter that much closer.

Jodie feels blessed by all the love and support she received from family and friends and hopes that her story will give hope to others who suffer. Throughout her anguish, she hung on to the thought that things would get better, and that each day of pain was bringing her closer to a better day. Although she continues to suffer from dry eye, minimal facial palsy, is deaf in one ear, and needs medication to control her head pain, Jodie is now fully able to enjoy her life and take pride in her accomplishments. She is upbeat about the future and wants to share that with others.